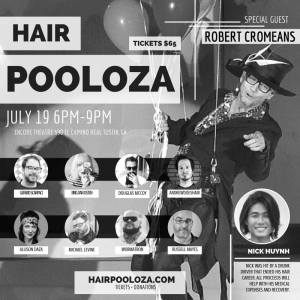 A couple of months ago my friend Russel Mayes contacted me and asked me if I wanted to appear at a hair show/ benefit he was putting on for a hairdresser friend of his named Nick Huynh, who was hit by a drunk driver and lost the use of his arm. Nick apparently didn’t have a lot of support elsewhere to get started on a new career and Russel wanted to help him with a bit of money and a show of moral support from the hair industry.

Russel is a good friend and I like to hang out with him whenever I can so of course I agreed. Now I’m an OK stylist but my area is more in coaching now, but given the people he had lined up for this thing it was an honour to stand on the same stage with them.

Here is a lineup of the talent that has volunteered their time, and a brief bio that doesn’t do any of them justice.

Allison Daza– This lady is simply a brilliant colourist. She is an educator with Davines and one of the most creative yet tasteful colourists as well as lovely people I have met in the industry.

Andrew Does Hair– Highly respected men’s specialist and industry educator, Andrew has a massive cult-like following in social media because he works hard, produces great imagery and video and keeps it very real.

Brig Van Osten– Brig came in to fame as the winner of the strongest season of Shear Genius. Brig is a fearless and gifted artist as well as a super cool person with infectious energy.

Douglas McCoy– Old school Bumble guy now working closely with R+Co. A video maker and photographer as well, his House of Pop salon was famous before the doors even opened. That’s how cool Douglas is.

Gerard Scarpaci– Brilliant cutter and educator originally with Sassoons, then JPMS, then Aveda and the long-time education director at Arrojo in New York. Oh yeah, also the co-owner of Hairbrained.

Michael Levine– Stylist, owner, writer photographer and educator. I run a large salon company and 2 academies with my wife.

Robert Cromeans– Robert has been kind of quiet for a while but is renowned for his hair shows and for helping to launch the careers of some of the industry’s most famous faces. The long-time creative director of Paul Mitchell, Robert has inspired an entire generation of stylists, myself included, to greater things.

Russel Mayes– Fantastic educator and one of the most flawless haircutters I have ever seen. Technical perfection and now a highly regarded hairdressing videographer

Wormatron– Badass barber from American Barbershop. I don’t know him personally but have followed his IG for a while and he is awesome.

This is going to be such a cool event, a once in a lifetime gathering of talent. You can still get tickets, which are ridiculously under-priced at $65 here:
http://www.eventbrite.com/e/hair-pooloza-a-benefit-for-nick-huynh-tickets-16606253752