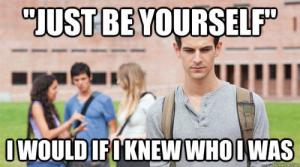 I like to think there are many ways to interpret something. And in the era of social media, inspirational memes have run rampant, a lot of them are about “being true to yourself.” And that is all well and good advice for some people.

But…I assume that I am not special or unique in any way so I will assume many people were like me to a large degree;
I am not particularly cool, charismatic, handsome, intelligent, or talented.
And even more importantly,
I didn’t truly know who I was until I was into my 30’s.

At each phase of life, we grow and evolve (hopefully we do. some don’t) through our experiences. If I was not open to influence and the idea of emulating someone else’s behaviour and personality, I would still be the same obnoxious, pot-smoking, know-it-all music snob I was when I was 16. Though in writing that it occurs to me that I’m pretty much that person still. But I don’t smoke weed anymore. It’s red wine now. So there is that.

Our opinions and views change just like the fashion and vocabulary we are into at that period of our lives. Age, experience, successes, and most of all failures all play a role in the person we are constantly becoming. I would say I evolve less often now that I’m in my mid-forties, but if you go through life being open to new ideas or challenges, you allow yourself to grow and learn from what you experience. What I’m trying to say is that life is a constant evolution. In fact, the worst people I ever encounter are the ones who are steadfast in their belief of who they are and how they think. Like many Republicans and all religious fanatics.

“Fake it Till You Make It.” A lot of people hate this phrase. It’s not ideal because it’s overly simplified, but I see it differently. What it means to me is you are willing to put yourself out there. To jump in with both feet and an open mind. It means you are willing to let go of your fears and personal limitations and go for it, even though it’s not necessarily who you think you are. It’s like Yoga. It’s a huge stretch and it hurts at first but eventually it becomes comfortable and feels great. And then you are not faking it anymore.

I have had some success as a hairdresser and salon owner. And that success has not come solely because of my skills as a stylist or my business acumen. I feel like at my core, I’m likely an asshole. I’m not talented enough to be a success based on my skills alone so I’ve had to learn to be a bit charming and to develop strong service aptitude. I’ve had to learn to smile when I didn’t want to and to be nice when it was the last thing I felt like being.

Time and time again, I have seen that the people with the highest successes in my company are the ones who worked the hardest for it. And a lot of that work was put into changing who the person was and how they presented themselves to other people. The smart ones quickly realize successful behaviour in life and in business is learned, and that if they wanted similar levels of success they would need to change too.

“I have to be me,” or “I can’t be fake,” are things I hear sometimes from my younger staff. And the one thing I have noticed is that they are always the ones who have the word “but” in their vocabulary. They use “I have to be true to myself” as a limitation on what they are willing to do. And unless they are incredibly talented, nice and charismatic, they are generally the lowest earners in the salon. I have anecdotal evidence that “I gotta be me” is akin to “I gotta be broke.”

Who you are today will likely and hopefully not be who you are in a decade. So why not turn it on when you leave the house and put your best version and adaptation of you out there for each scenario you are in. There is nothing wrong with being yourself if great things are happening for you and life is going well. But if not, the only things you should cling to and not be willing to compromise are your manners, your morals (if they are good) and your empathy. Don’t become an asshole. But go for it. You might just really like who you become.

And if you don’t have Neil Young’s Freedom, Beastie Boys Paul’s Boutique and The Clash London Calling, your music library is lacking.